Emergency directives issued by the Israeli authorities, which bar freedom of movement and other activities under the pretext of the coronavirus, are making it harder to monitor, document, and defend against Israel’s violations of Palestinian human rights in multiple areas of life, say Palestinian and Israeli rights groups.

“We are still monitoring cases, but our researchers are unable to be fully present and document the area,” said Rania Muhareb, legal researcher and advocacy officer at Al-Haq, a Palestinian human rights organization based in Ramallah. “It is very difficult to say if there are more or less incidents for the simple reason that, in this situation, it is harder to get all the information at the same speed we usually do.”

The violations, Muhareb explained, include advancing land confiscations and construction plans for Israeli settlements and the separation barrier in the occupied West Bank; settler violence against Palestinian farmers; incursions and arrests in Palestinian towns and villages; and home demolitions.

“These abuses highlight a widespread and systematic effort to undermine the rights of Palestinians even during a public health emergency of international concern,” she said. Despite the serious crisis, “Israel still has time to carry out these unlawful acts.”

Muhareb noted a March 19 incident in the East Jerusalem village of Sawahra Al-Sharqiya, where Israeli bulldozers destroyed several structures including a barn for sheep, but which could not be documented because of the ban on movement.

Settler violence has also continued in the area around Nablus, she added. On March 17, a group of settlers attacked a Palestinian house in the village of Burin; according to people who monitored the incident, Israeli soldiers shot rubber-tipped bullets, shock grenades, and tear gas at the Palestinian villagers instead of stopping the settlers. Three days later, on March 20, settlers severely beat farmer Ali Musafa Zouabi south of Jenin. 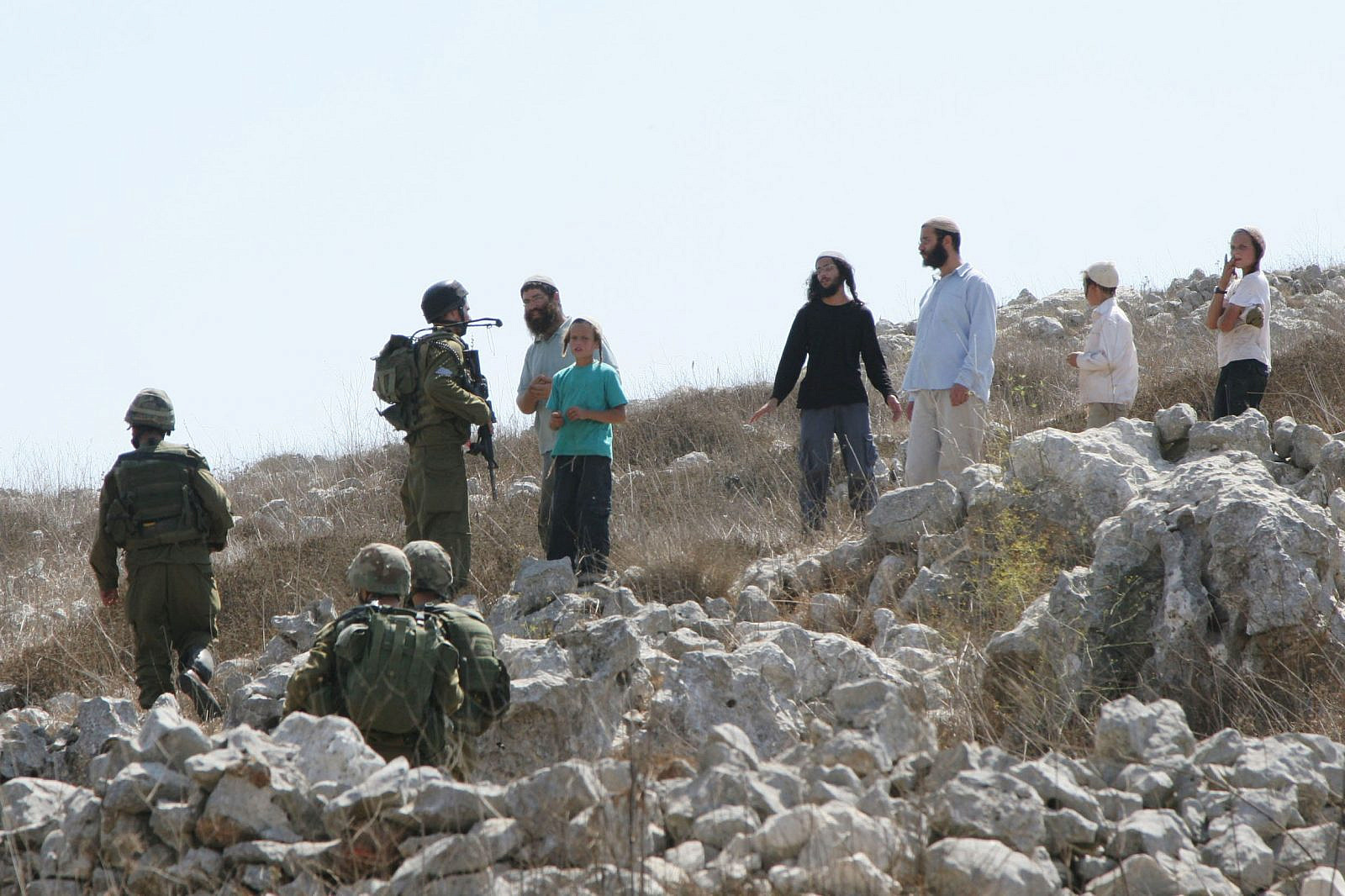 Jewish settlers argue with Israeli soldiers during a confrontation between the settlers and Palestinians over farming land between the Jewish settlement of Bracha and the West Bank village of Burin on September 21, 2010. (Wagdi Ashtiyeh/Flash90)

Israeli human rights group Yesh Din similarly reported violent settler attacks that seriously injured Palestinian farmers and shepherds last week. The settlers came from Halamish, Homesh (a former settlement that was demolished but on which Israelis are still staying illegally), and Kochav HaShahar. None of the settlers were taken into custody.

IDF soldiers do not have the authority to arrest Israeli citizens in the West Bank. In contrast, the military arrested several Palestinians in the old city of Jenin, Qalqilya, and near Nablus last week, Muhareb said.

These detainees, according to new regulations around the pandemic implemented on March 15, must be quarantined for 14 days before they can be interrogated. The Israeli Public Security Minister can now ban family visits for prisoners and detainees, and limit prisoners’ consultations with a lawyer to the telephone only, said Sahar Francis, director of the Palestinian NGO Addameer — Prisoner Support and Human Rights Association.

“The Israeli army is still arresting people when they are aware they can’t interrogate them, so they send them to isolation for 14 days. This is a violation of the detainees’ basic rights,” she said.

“Since two weeks or more, they totally closed all prisons and detention facilities. [Prisoners] have not had contact with their families, and lawyers can talk to them only when a court hearing on their case is scheduled. There are 5,000 prisoners totally disconnected from the outside world.” 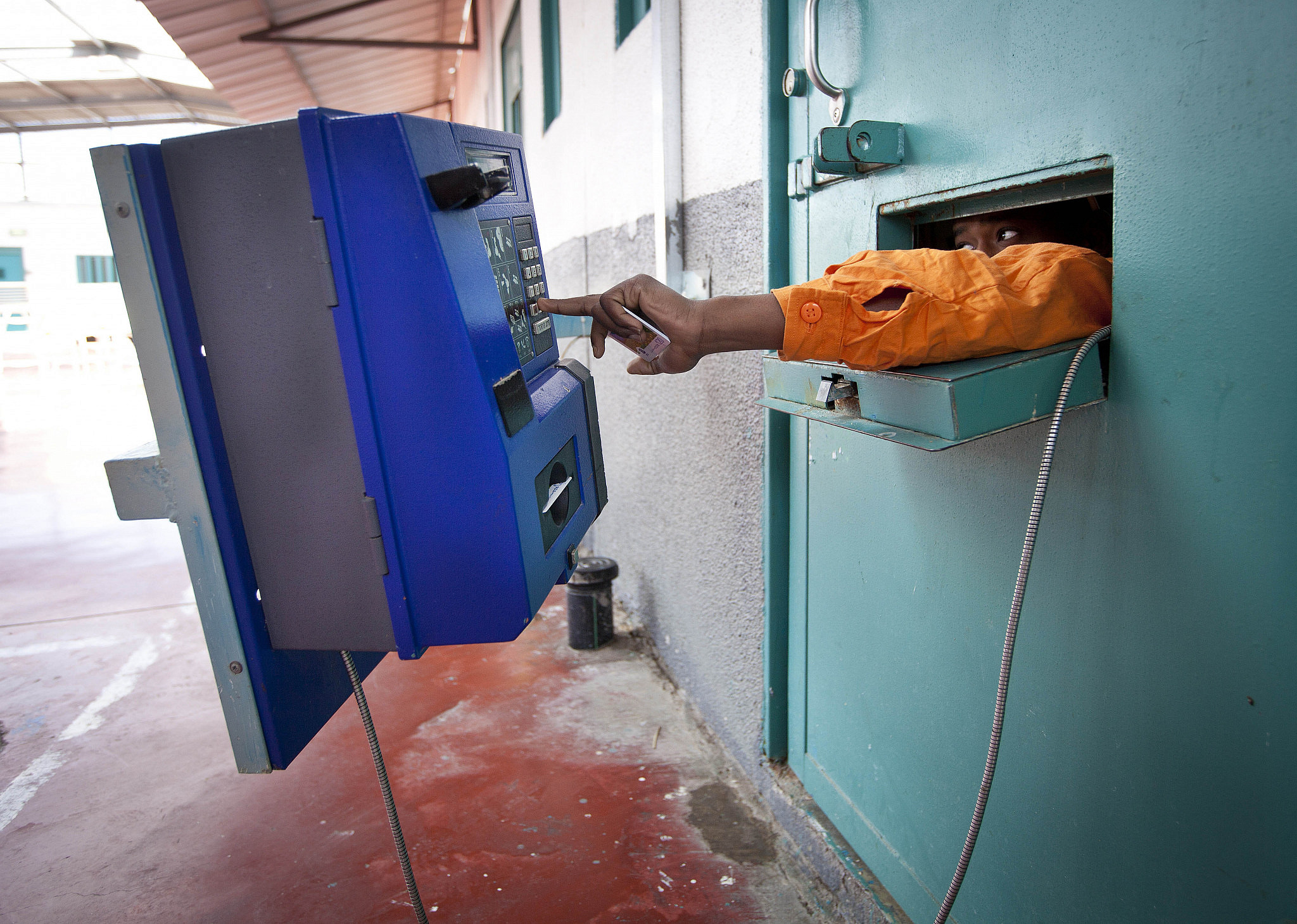 The Israel Prison Service spokesperson noted that the new regulations are being enforced in all Israeli prisons, regardless of the reasons prisoners are being held.

“It is about keeping them healthy and keeping the coronavirus out — that is our only goal now,” she said. “In a short while, hopefully, when this is over, things will go back to how they were before. It is more in our interest to keep them healthy than anything else.”

The spokesperson said that the prisons have passed out information to all inmates in various languages including Arabic, and have disinfected their facilities. They are also following the Health Ministry’s directives to increase the work shifts of all prison personnel to 96 hours, so that they can reduce movement in and out of the prisons.

“Until now we do not have any prisoner with the coronavirus, and we hope it will stay that way until the end of the crisis,” she said. “We don’t know if that is possible, but we are trying our best.”

Still, said Addameer’s Francis, there is concern for the Palestinian prisoners’ health given their overcrowded conditions. Prisoners have also reported that they have not been given any special hygienic supplies, and that no other precautions are being taken by the prison authorities.

On March 26 Addameer, together with Adalah — The Legal Center for Minority Rights in Israel and private attorney Abeer Baker, petitioned the Israeli Supreme Court on behalf of prisoner Kafri Mansour to cancel the emergency directives in the prisons.

While acknowledging the need to protect the health of inmates, the petition maintains that the Israeli government has no legal authority to impose the ban on lawyer and family visits, which “overwhelmingly and disproportionately violate the prisoners’ rights,” particularly those of juvenile prisoners. The restrictions also prevent prisoners from reporting any rights abuses within the prison, the petitioners charged. 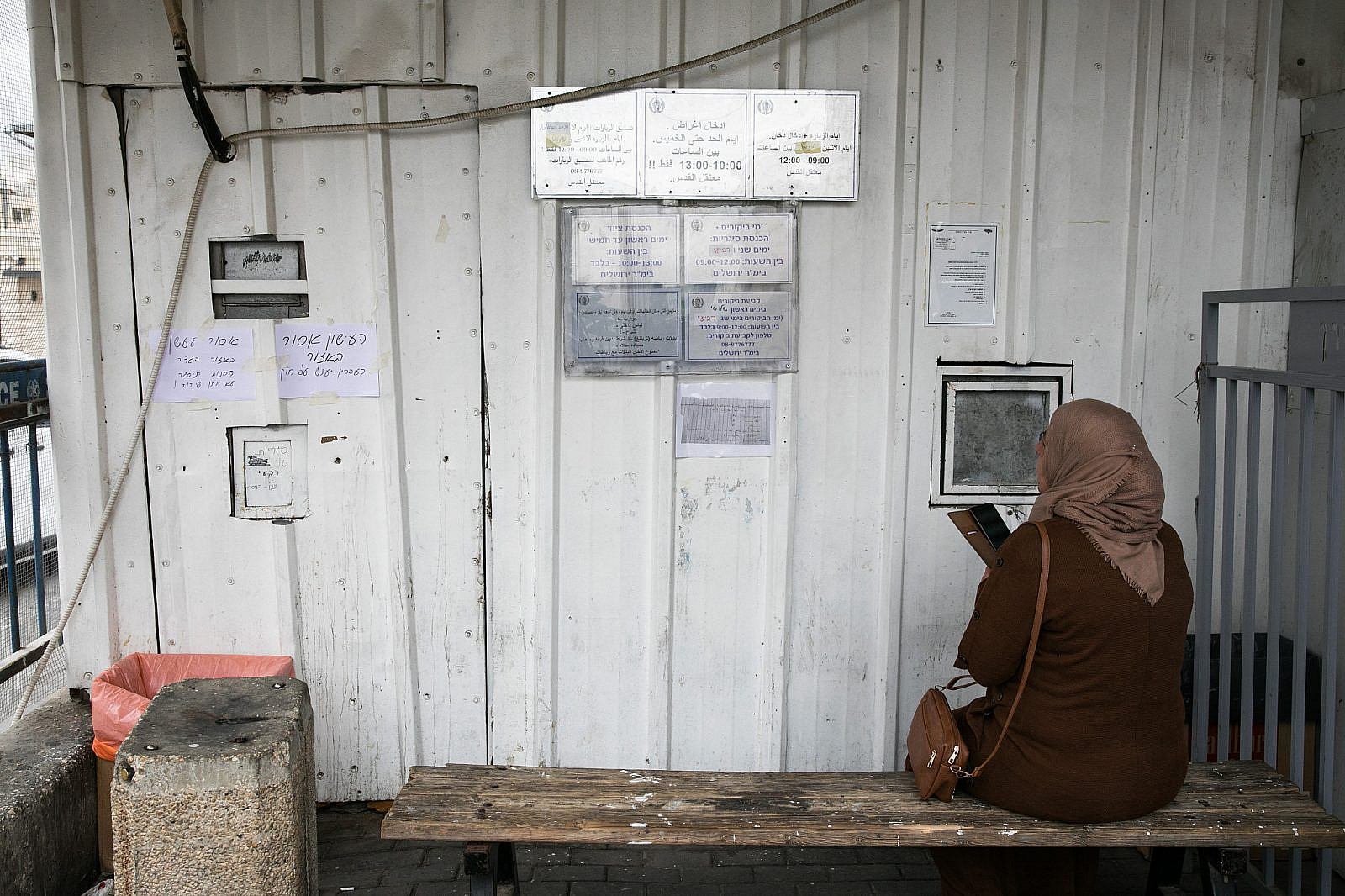 View of the entrance to the detention center in the Russian Compound, Jerusalem, March 12. 2020. (Olivier Fitoussi/Flash90)

The petition also describes how a conversation between attorney Abeer Baker and a prisoner was broadcast via loudspeakers in front of prison guards and other inmates, violating lawyer-client confidentiality.

“The challenges that this state of emergency pose to Israeli authorities cannot allow them to run rampant over fundamental human rights,” said Adalah attorney Aiah Haj Odeh. “International law requires that Israel must recognize the right of prisoners and detainees to visit with family, and to consult with lawyers and access the courts.”

‘They arrest children just as usual, as if there was no virus’

Meanwhile, in the East Jerusalem village of Issawiya, residents said that they had hoped the focus on the pandemic would reduce the Israeli police raids and patrols that have been carried out aggressively in their neighborhoods since last summer.

But instead, they say, these practices have remained. Police roadblocks are still causing long traffic jams; confrontations with youths include the use of tear gas, stun grenades, and rubber bullets; and arrests are carried out with complete disregard of the government’s coronavirus rules, endangering the Palestinian residents.

“We thought the coronavirus would help stop things, but nothing has changed,” said Muhammad Abu Hummus, a political activist from Issawiya. “They arrest children just as usual, as if there was no virus. Every day they [the police] go around without masks and without gloves. Outside they maybe help people, but in Issawiya, they only bring tear gas and balagan [mess or chaos].”

Police spokesperson Micky Rosenfeld said that police presence in the village is part of regular patrols of all Jerusalem neighborhoods undertaken specifically in the context of the coronavirus outbreak, intended to ensure that residents stay at home. 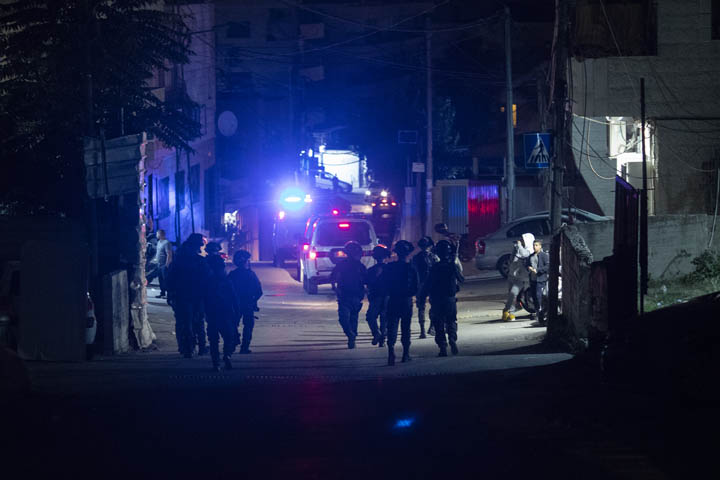 “There are no raids going on, just regular police activity,” he said. “If the residents want to claim and use that against the Israeli police, that is their issue. The police are patrolling all the neighborhoods and implementing the new laws in order to keep people safe at home as much as possible, for their own benefit and their own safety.”

Nevertheless, in a March 19 report, Israeli human rights group B’Tselem questioned why the police had chosen this time to escalate what they described as collective punishment of the village residents, despite an “unprecedented crisis requiring… extreme social isolation measures.”

The police presence in the village stokes confrontation, said B’Tselem, which is problematic enough during normal times but even more so during the pandemic, when congregating in groups can spread the virus.

“The police abuse of Palestinians in [Issawiya], by now a permanent feature of life in the neighborhood, is illegal and cannot be justified even under the usual routine of occupation,” B’Tselem said in their report. “The police conduct is jeopardizing public safety (including the health of the police officers) and violating the medical guidelines on social isolation.”

B’Tselem added: “The fact that Israeli authorities disregard the lives of [Issawiya] residents, including children and teens, is nothing new. Yet continuing and even escalating such conduct during a pandemic is an especially appalling manifestation of this policy.”

Another village activist, who asked that his name not be used for personal safety, told +972 that he had to rush his seven-month-old daughter to the village’s medical clinic after police used tear gas during a confrontation with Palestinian youths last week, which seeped into their home.

“The situation is terrible,” he said. “Of course I’m afraid. Why put me in a situation where I have to take my child to the clinic during the time of the coronavirus?”

This is my land; this is my home.