Jerusalem (The Inside Palestine)-Khaled Bashir knows too well the pain of seeing his home razed by Israeli authorities.

He has lived through it twice before with his family, who live in Jabal al-Mukaber neighbourhood in occupied East Jerusalem. Now, a third demolition is nearing.

For the longest time, the justification was the lack of building permits. But the newly announced plan to build a highway that would pierce through the area and serve illegal settlers has revealed a more sinister intention, Bashir says.

“For many years I tried to obtain a [building] permit, but all of our requests were denied,” the 57-year-old sorrowfully told Middle East Eye.

“Later we found out that the reason was that all homes [here] are slated for demolition to make way for a settler road that would be built on the ruins of our homes.”

The Israeli Jerusalem municipality, which governs both the Israeli western side of the city and the occupied Palestinian eastern side, is constructing the “American road”, a massive bypass highway that would improve the connection of illegal settlements in the south, east, and north of East Jerusalem.

The ambitious ring road will extend across 12 kilometres from the Mazmoriya checkpoint near Sur Baher, southeast of Jerusalem, to the Zayyim military checkpoint to the north.

In the Jabal al-Mukaber neighbourhood, dozens of families will bear the brunt of the project, which will force hundreds into homelessness.

Bashir has had two houses demolished over the years. One in 2000 that he built on his father’s land and another in 2014, which he built for his son Muhammad.

Both times the municipality razed the buildings citing a lack of building permits. But such permits are near impossible to obtain for Palestinians.

‘They want to force the residents to resort to local or external investors, or to resort to banks to take out loans, which would mean that the landowners would only receive a single residential apartment’

According to Peace Now, a settlements watchdog, only 30 percent of the building permits given by the Jerusalem municipality in East Jerusalem between 1991-2018 were in Palestinian neighbourhoods – despite Palestinians making up more than 60 percent of the population in the city.

In Area C of the West Bank, nearly 99 percent of Palestinian building applications were rejected between 2016 and 2018.

Meanwhile, between 2012 and 2021, Israel approved plans for 55,704 new units in Israeli settlements across the West Bank, which are illegal under international law.

Rights groups, both Palestinian and Israeli, have long said that Israeli policies are “deliberately” aimed at derailing planning in Palestinian neighbourhoods.

Expulsion or living in debt

Muhammad Bashir, an architect from the area, has been following 62 cases of families who received demolition orders in Jabal al-Nukaber to make way for the construction of the American Road, the first stage of which was recently completed.

Three kilometres of the road have been built, Muhammad told MEE, swallowing up and fragmenting lands in the neighbourhood.

The 62 buildings slated for demolition house 750 people, including some 300 children, and at any moment they could all become homeless.

The municipality had given residents five years to engineer solutions to keep their homes, some of which were built before Israel occupied the city in 1967. The exemption expired recently and the highway project construction work got closer and closer.

In the first phase of construction the road was 16 metres wide. The Ministry of Transport, however, is pushing to widen it to occupy 32 metres, Muhammad said.

The second phase will entail the “relocation” of people facing expulsion by the demolition orders. The municipality has already confiscated 382 dunams (38 hectares) of their land, Muhammad said, while facilitating the passage of settlers to pass through Palestinian neighbourhoods.

The municipality suggested alternatives for residents with demolition orders, but they are neither realistic nor fair, Muhammad says.

The proposal stipulates erecting buildings upwards on each side of the road. In them, four stories must be exclusively allocated for parking, another four for commercial use, and only two stories for residential use, each containing four apartments.

The estimated cost for each of those buildings is between 20 and 25 million shekels ($6m to $7.7m), which many Palestinians in the area can’t afford without loans.

The options left for residents are either expulsion or indebtedness. One strategy the municipality is taking is to empty the area completely of its inhabitants and replace them with commercial centres, Muhammad says.

“They want to force the residents to resort to local or external investors, or to resort to banks to take out loans, which would mean that the landowners would only receive a single residential apartment, while the investors or banks would retain the lion’s share,” Muhammad told MEE.

“The Jabal al-Mukaber residents refuse this unequivocally, considering vertical building to be incompatible with the rural context to which they have grown accustomed to.”

The American road project, named after an abandoned narrow road partly built by US contractors in the early 1960s, will cost up to $250m, according to Khalil Tafkaji, the director of the map unit at the Centre for Arab Studies in Jerusalem.

The project is led by the Moriah Jerusalem Development Corporation, which is tied to the municipality, in partnership with the Israeli Ministry of Transportation.

Tafkaji, who is a life-long expert on settlement planning, says the transportation ministry first proposed the project in 1994, advertising its urban, security, and economic importance. 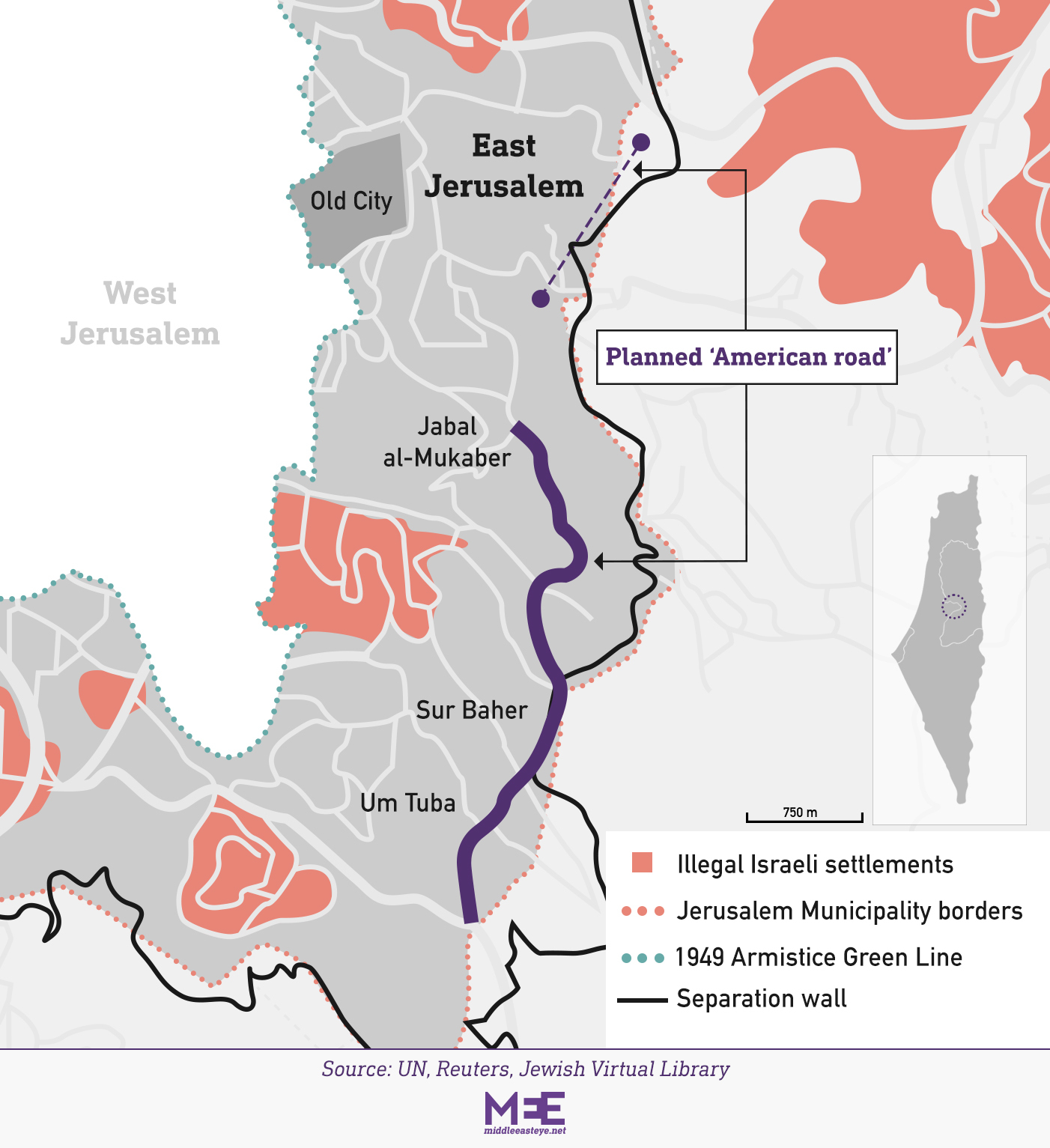 In 1996, the blueprint for the project was drawn up, which is when it first became clear that the municipality was planning for the large highway.

In order to implement this project, around 1,070 dunams of land were confiscated from the Palestinian neighbourhoods of Sur Baher, al-Sawahra, Jabal al-Mukaber, Jabal al-Zaytoon, Antara, and al-Issawiya.

After its completion, the road will connect all settlements east of Jerusalem with the city centre and with all the settlements west of Jerusalem, hence easing the travel of settlers from Maale Adumim, Kedar, and Mitzpe Yeriho settlement blocs.

The American road will also service the settlements of Gush Etzion, Efrat, and Jabal Abu Ghneim, helping ease their movement to the northeast of Jerusalem in order to reduce traffic in the city centre, Tafakji told MEE.

The road will tie the settlements inside the municipal borders with those settlements that lie outside of them, with the objective of implementing the Israeli vision of a “Greater Jerusalem,” he added.

The objective, Tafkaji believes, is to shift the demographic balance in favour of the Israelis by annexing those settlements to become a part of the Jerusalem municipality’s borders

That would isolate neighbouring Palestinian villages and towns and encircle them with settler roads and settlements while confiscating what little remains of their land for the purpose of constructing these roads.

A total of 132 buildings are braced for demolition in Jabal al-Mukaber. While 62 of them are being removed to make way for the new road, 70 others are to be demolished under the controversial Kaminitz Law.

In the event that these demolitions are implemented, the population of Jabal al-Mukaber would shrink overnight from 38,000 inhabitants to 20,000, according to Muhammad.

The Kaminitz Law, adopted by the Israeli Knesset in 2017, gives authorities increased powers to crack down on unlicensed buildings within Israel and occupied East Jerusalem, which was unilaterally annexed by Tel Aviv in 1980, in violation of international law.

While the law does not target any specific group, it’s viewed as being “discriminatory” towards Palestinian citizens and residents who are disproportionality impacted by it in reality.

Palestinians see it as a way of preventing Palestinian construction, destroying homes, and halting urban expansion.

Since the law was adopted, residents say there has been a surge in administrative violations, amounting to hundreds of thousands of shekels, issued against them by municipality inspectors, who have been given near unconditional powers to do so.

Inspectors can issue such violations without needing to obtain permission from the court, which also had its powers to freeze demolitions scaled back.

This law has essentially undercut any possible legal avenues for contesting or postponing the demolition of any home built after 2017.

The residents of Jabal al-Mukaber are stuck between a rock and a hard place, and after exhausting all avenues of appeal and protest, now seem to have had enough.

Since January, they have held weekly rallies outside the municipality demanding an end to the demolitions.

But ever since the demonstrations began, the municipality has responded by stepping up demolitions, Muhammad said. This year, eight buildings have been destroyed so far, as 170 more families wait in fear for the fate of their homes.

Despite all the hurdles set up by Israeli authorities and the demolitions he endured, Khaled never gave up.

In 2020, he built yet another house for his son Laith. This time he was forced to demolish it himself before the end of the year to avoid exorbitant fines on top of demolition by the municipality had he not done it himself.

Now he is hanging tight to the one home he has left, which has also been handed a demolition order. The thought of leaving is “unbearable” to him, he told MEE.

The road threatens more than 200 people from the Bashir family who live on their land in Jabal al-Mukaber.

Only a few feet away from Khaled’s home lies the house of Nabil Bashir, which is also slated for demolition for the same reason. A demolition that would displace all seven of its inhabitants.

He spent another 100,000 shekels paying architects to draw up a regulation-compliant blueprint for the land to obtain a building permit – to no avail.

“I feel shackled,” Nabil said, decrying his limited options in the face of Israel’s policies.

“I am unable to provide my sons with a roof over their heads, so they’re now threatened with forcible expulsion at any moment. All because they want to build a settler highway on our land.”

Suspension of Corbyn will define Starmer as Iraq defined Blair

Sudan rejects any attempt to normalise ties with “Israel”

BDS is a legitimate movement to protest against injustice

‘Israel’s’ killing of journalist is a challenge for the ICC, legal expert says
June 28, 2022

‘Israel’s’ killing of journalist is a challenge for the ICC, legal expert says