Between 1891 and ‘92, Francis William Reitz, the President of the Orange Free State (in what is today South Africa), exchanged a series of letters with Theophilus Shepstone, the former administrator of the Transvaal, to discuss the so-called “Native Question.” The Boer republics, Reitz wrote, should “adopt the principle and maintain it steadfastly, that there shall be no ‘equality’ between the [Black] aborigines of South Africa and the people of European descent who have made this land their home.”

Reitz’s sentiments, like those of other Afrikaner leaders, informed the basis of what would eventually become Apartheid. Two decades after his letters, the Union of South Africa passed the 1913 Native Lands Act, consolidating earlier colonial measures that barred Black people from acquiring property outside of designated zones. Ten years later, the 1923 Native Urban Areas Act restricted the movement of “undesirable” persons and enabled their removal from towns and districts.

In 1950 — two years after Apartheid was officially declared national policy — the Group Areas Act expedited residential segregation across the country. The 1983 constitution, which was touted as a liberal reform, improved some rights for Coloureds and Indians, but kept the Black majority disenfranchised and the White minority in power. Even after South Africa’s first free elections in 1994, political and corporate elites effectively reshaped many of Apartheid’s institutions to preserve racial and class hierarchies, which remain to this day.

Like other oppressive regimes, Apartheid in South Africa was not a static entity that simply sparked into existence in 1948. It was continuously developed, reconfigured, and repackaged to suit the desires of those in power and to silence those resisting it. It was, to borrow scholar Patrick Wolfe’s words on settler colonialism, “a structure not an event,” an organizing mechanism rather than a moment in time.

This history ought to instruct those who are waiting with bated breath for July 1, the date the Israeli government has pledged to begin annexing large parts of the occupied West Bank. Foreign officials, mainstream analysts, and local activists — many well-intentioned — have spent years warning that Israel could become an “apartheid state” if it officially absorbs these territories. Now they are sounding the alarm that next month could be the tipping point that finally seals this fate.

It is rather obscene, however, that many people are still waiting for a specific piece of legislation, or a certain government order, to validate the accounts of millions of Palestinians experiencing apartheid as we speak. Like South Africa, Israel’s complex regime was not created by a single dramatic “moment”: it was meticulously designed over decades, fueled by an ideology that rejected equality between the natives and the settlers who, in Reitz’s words, had “made this land their home.”

Why, for example, was Israel not an apartheid state in 1950, when it introduced the Absentees’ Property Law to transfer Arab land to Jewish immigrants? Why wasn’t it apartheid when the Knesset annexed East Jerusalem in 1980, in the same way it is preparing to do with the Jordan Valley today? Or in 2003, when it banned Palestinians from uniting with family members who have Israeli citizenship, yet still allowed any Jew abroad to be naturalized under the Law of Return? 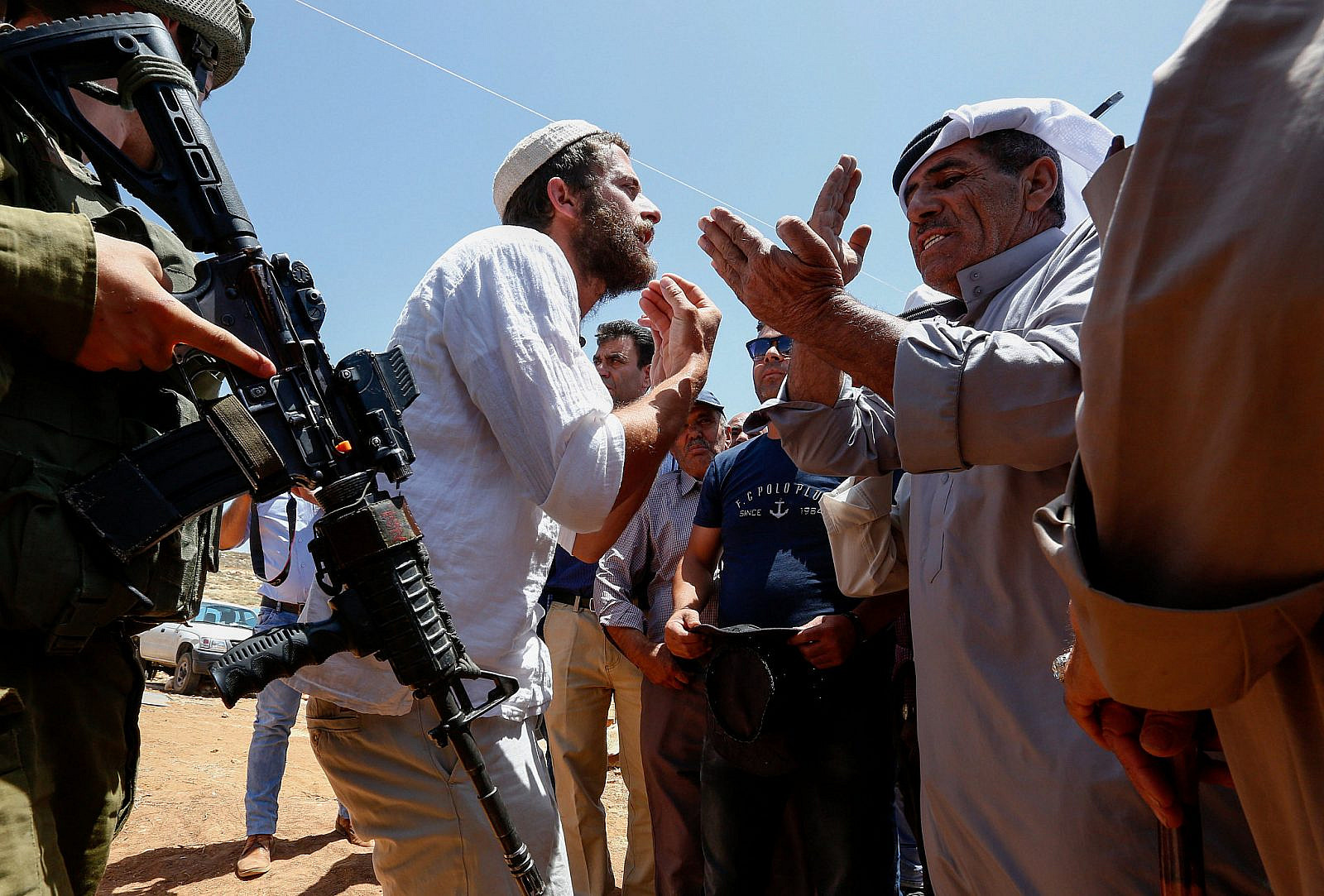 An Israeli settler argues with Palestinians during a protest against a new tent placed by Israeli settlers near Pnei Hever settlement, in the West bank village of Bani Naem on June 23, 2018. (Wisam Hashlamoun/Flash90)

What about the Jewish Nation-State Law, passed two years ago, which decrees that self-determination in this land belongs solely to Jews? Or the countless military laws that rob and incarcerate Palestinian civilians, while sheltering Jewish-Israelis under civil law? Shouldn’t half a century of settlements and infrastructure, which have only grown with time, give the hint that Israel has little intention of relinquishing the West Bank?

Given this abundance of “moments” to choose from, many Palestinians have grown tired of the latest, artificial threshold to “prove” that Israeli apartheid exists. Instead of acknowledging what Palestinians are voicing, the international community is buying more time for Israel to signal that it doesn’t desire apartheid — even as it uses every second of that time to show the opposite. The line of proof has been moved, quite literally, from the shards of the 1947 UN partition plan to the shrunken Bantustans outlined in Trump’s “Deal of the Century” in January. If annexation goes forward, that line will likely be moved again.

The drama around next month’s supposed milestone is thus not just naïve, but dangerous. If the Israeli government backtracks or delays its annexation push — as some reports are suggesting — the world cannot fall back into the myth that Israel has saved itself from the fate of apartheid. Under every shade of Israeli rule, Palestinians have only ever been exiled refugees, occupied subjects, or second-class citizens. There is nothing that another bill can tell us that decades of laws and policies haven’t already. And there is no need to wait for Israelis to admit their regime is apartheid to prove that Palestinians were right all along.

No one in Gaza is safe from Israeli occupation warplanes terror

The occupation fire teas gas, rubber-coated bullets at Palestinians during brawl with settlers

Over 4,000 Palestinians unable to return home because of coronavirus