Hebron (The Inside Palestine)- On June 1, Israeli settlers attacked the village of Tuba in the occupied West Bank and burned all the hay my family had bought to feed our sheep. Food that was supposed to last a whole year was burned in just two hours.

Settler violence is only part of the occupation’s colonial strategy to take over our land. The Israeli military demolishes our homes during the day, and the settlers destroy our livelihood during the night.

As I stood there watching the fire, I felt isolated, helpless, and oppressed. While I was relieved that my family was physically safe, we were emotionally devastated. We were terrified. We rushed to stop the fire from spreading to more of the hay, to make sure our children and our sheep were safe, and to try and save what we could.

It took the Palestinian fire department two-and-a-half hours to arrive, despite the fact that the nearest fire station is only a few miles away. The fire truck had a hard time driving on the dilapidated path leading to Tuba, where we live, as the Israeli military doesn’t allow us to maintain the roads that lead to our community in the South Hebron Hills.

In the morning, we were afraid for our future. We had no food for the sheep, and no money to buy more. The fire destroyed 41 bales of hay, worth approximately $7,000.

Sheep are our livelihood and the only source of survival in Area C of the West Bank, which is under full Israeli military control and is in an area that has been designated by the army as “Firing Zone 918.” As nearby settlements expand and close in around our communities, it is becoming impossible to continue our traditional methods of living from the land. Under occupation, however, Israel also prevents us from developing any other form of economy.

Jewish Israeli settlers established Ma’on in the early 1980s, and the settlement expanded in the early 2000s, when the outpost of Havat Ma’on was built only a kilometer away from Tuba. Since then, settlers have taken over a majority of our grazing land belonging to Palestinian villages in the area.

The army and the settlers seem to be working in tandem to steal our resources. Soldiers take our land under the guise of security, only to then give it to settlers to establish agricultural outposts. This is no accident. Settler expansion and violence take place under the protection of the army and with legal support. Whether it is a firing zone, or by using the outdated Ottoman laws to seize control of huge swaths of land that are then declared state land, there is full cooperation between the settlers and the military. 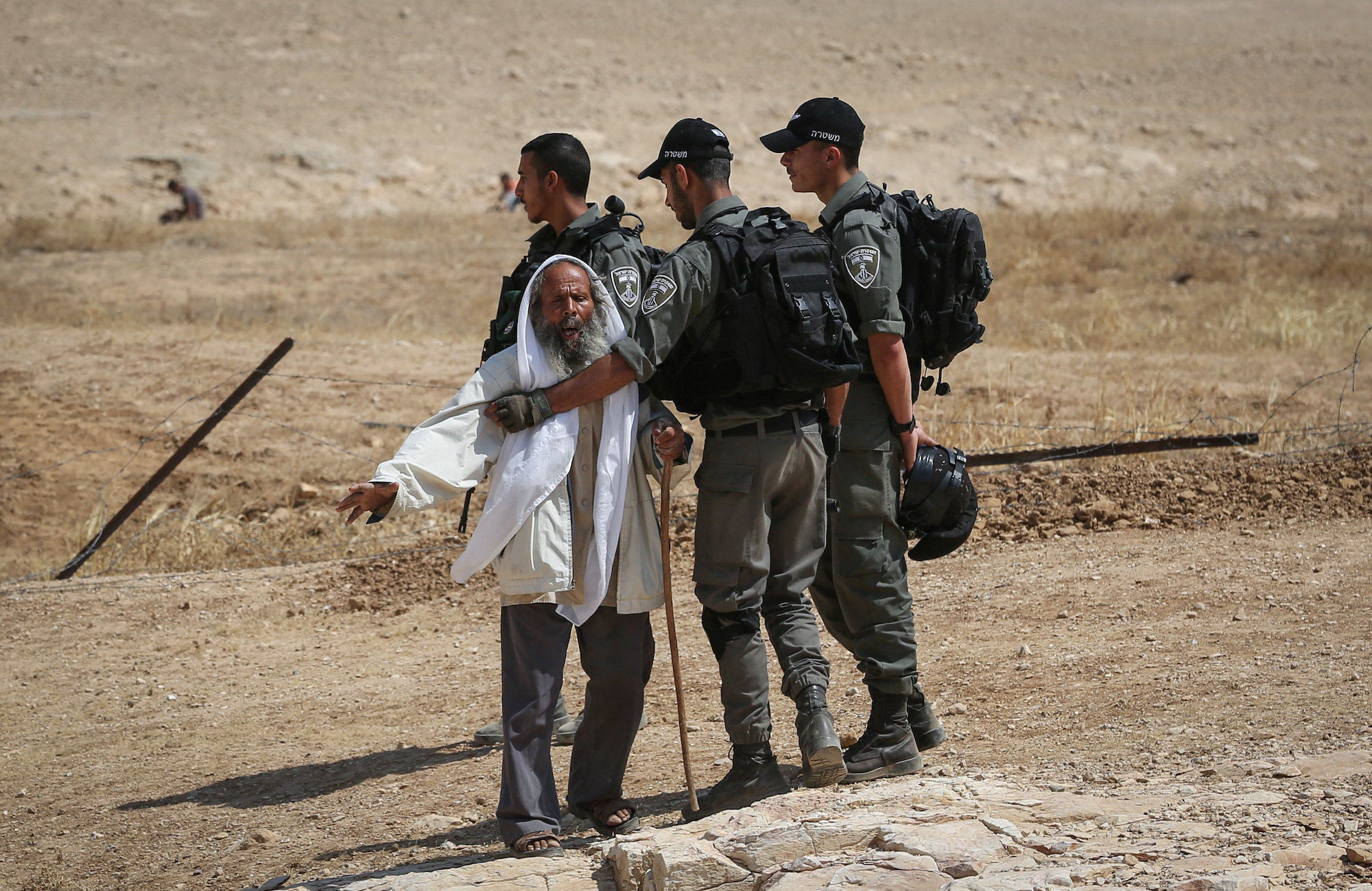 Israeli troops hold back a Palestinian man as they demolish sheds belonging to Palestinians in the South Hebron Hills, June 12, 2019. (Wisam Hashlamoun/Flash90)

Since the establishment of Havat Ma’on, the area between Tuba and the outpost has been a regular site of harassment by settlers and the military. We continued to graze in the area, despite all the harassment and violence and risk of arrest and injury. Yet at the beginning of the year, Ma’on expanded again with a new outpost, which prevented us from accessing the nearby villages of Kharuba and Sarura, where we regularly graze.

As a result of losing access to these grazing areas, the only way for us to stay alive and in our homes is to buy animal feed from the city and transport it to the village. Over the last 10 years, we have had to purchase bales of hay to supplement our grazing. But because of Havat Ma’on’s expansion into our land, this is the first year we had to buy the hay bales so early in the season.

My grandfather and father remember taking their sheep out to graze freely before the settlements were built here. They told me about how they never needed to buy any food from markets, and how the land provided enough for the family to live on. But now that we have lost one of our last grazing areas, the profits from the products we make from the sheep’s milk, which are supposed to be our livelihood, will be spent simply keeping the sheep alive.

What happened that June night is not an isolated incident; settler violence is only part of Israel’s colonial strategy to force us out of our land. If this is not ethnic cleansing, what is it?

The economic condition in Gaza is getting worse