At the California Democratic Party’s fall convention on November 17, activists pushed a resolution that would have recognized the Palestinian right of return. Although the amendment ultimately failed to be voted into the platform, supporters point to the fact that no vote tally was actually taken and that the results could have been too close to call.

It’s simple: Palestinians should be free. End US funding for Israeli injustices now.

Amazing to be at @CA_Dem Convention this weekend and see the waves of support for #PalestinianFreedom. The tides are turning. #CADEM19 #CADEM 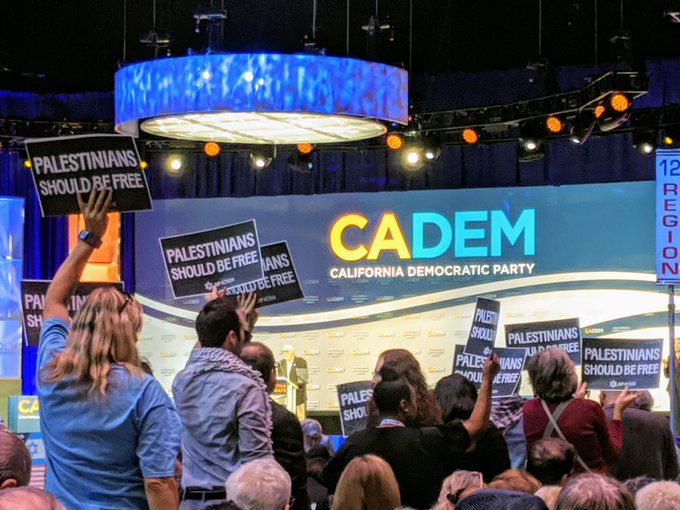 Members of Jewish Voice for Peace Action, the party’s Arab Caucus, and other pro-Palestine advocates collected petition signatures on the convention floor throughout the previous evening and ended up getting over 400 delegates to back the amendment. Prior to the vote, Palestine American League co-founder Yassar Dahbour and Jewish Voice for Peace Action supporter David Mandel called on the  3,300 California delegates to include the amendment in the platform. The amendment read:

Proactively seek a solution to the Israeli-Palestinian conflicted negotiated by the parties that guarantees equality, security and democracy for all, no matter what the final settlement regarding states and borders. Israeli Jews and Palestinians alike deserve peace, dignity, self-determination, security and a normal life free from occupation, terror and incitement. Oppose any unilateral annexation of territory, and support the right of all those who were forced from their homes to return to their homelands and receive compensation for their losses.

Although other outlets have reported that roughly 65% of the delegates ultimately rejected the resolution, there was no actual vote tally and activists point to the fact that the chair quickly assessed a voice vote. A photo taken during the vote suggests that 65% could be a severe misinterpretation of the actual results. (My earlier account of this too; see endnote.)

“I consider it a victory that our amendment calling for equal rights for all in Israel Palestine made it to the floor for debate,” said Marcy Winograd, who co-founded the Progressive Caucus of the California Democratic Party. “This is the first time in party history that the voices of a Jew and Palestinian, standing together for the right of return, for the right of exiled Palestinians to exist in their homeland, for the right of Palestinians and Jews to live free from occupation and terror, were amplified across the convention hall to be heard by thousands of delegates, many of them waving placards ‘Palestinians should be free’ and standing in line behind our speakers to demonstrate solidarity. The voice vote was inconclusive, so the Party Chair called for delegates in support of the amendment to waive their delegate cards. There was never an actual count of the vote, so any reporting that quotes a percentage is inaccurate.”
Winograd also points out that additional victories were secured during the convention. The platform committee agreed to defend the right to engage in speech critical of any government by opposing all efforts to criminalize such speech. There was anti-BDS amendment in an earlier draft of the platform, which was removed after pressure from activists.
The inconclusiveness of the final vote has certainly not stopped pro-Israel groups from celebrating the event as a victory. Mark Mellman is the CEO of Democratic Majority for Israel (DMFI). DMFI was created earlier this year to quash growing pro-Palestine sentiment within the Democratic party. “We’re tired of sitting back and letting a few vocal outliers hijack the Democratic Party’s Israel policy, so we’re thrilled an overwhelming majority of California Democratic Party leaders and delegates rejected attempts to incorporate extreme and one-sided, anti-Israel planks into their platform,” said Mellman in a statement. “Instead, the platform continues the Party’s proud history of supporting both Israel and the peace process.”

Similar sentiments were expressed by Progressive Zionists of California (PZC)  founding member Susan George. “We are pleased the party has once again rejected extremism, and decided to focus on unifying issues. 2020 is the election of a lifetime, and we must focus on keeping the tremendous gains California Democrats made in 2018, not get derailed by a divisive conversation,” said George.

Palestinians are struggling to survive in Bethlehem

Anti-Defamation League teams up with PayPal