Before Bernie Sanders took the stage at a rally in Dearborn, Michigan, six speakers addressed the crowd to make the case for the Democratic presidential candidate. They were all Arab Americans.

In the Midwestern city known as the capital of Arab America, Sanders was welcomed on Saturday with a dabke troupe that performed a traditional Arabic dance to Palestinian music.

A prominent local imam delivered parts of his remarks in Arabic, and a Palestinian-American activist chanted, “habibi [my dear] Bernie”.

‘I look around this room, and I see people coming from so many different backgrounds. It is beautiful. This is what America looks like at its best’

While it was not specifically promoted as an Arab-American event, the gathering appeared to be a celebration of the Arab community’s support for Sanders.

As he took the podium to thunderous cheers, the senator opened his remarks by pledging to eradicate discrimination in a nod to his audience – members of a community that has long suffered from bigotry, especially under the current administration of President Donald Trump.

“We’re going to fight to end all forms of discrimination in this country.”

Sanders stressed the need to defeat Trump in the general election, accusing the US president of anti-Muslim bigotry.

“He thinks that he’s going to win re-election by dividing us up. We are going to beat him because we’re bringing our people together.”

But for most of the remainder of his speech, the senator argued why he is best positioned to defeat Trump, drawing distinctions between himself and his Democratic rival, former vice president Joe Biden, on trade, healthcare and environmental protections.

“I have zero doubt in my mind that together, we are the campaign that could beat Trump,” Sanders said. “We cannot defeat Trump with the same old, same old type of politics.” 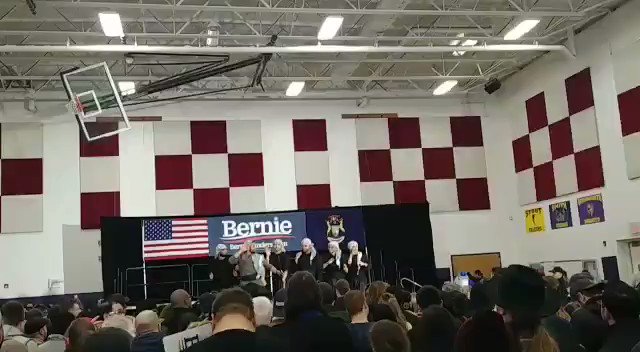 603 people are talking about this

As he explained the struggles facing young people in America today, Sanders was interrupted to chants of “Bernie, Bernie,” so he paused his remarks to laud the energy and diversity of the crowd.

“Sometimes people say, ‘Bernie, you’re 33 years of age. How do you keep going?’ I get inspired because I talk to groups like this,” Sanders said.

“I look around this room, and I see people coming from so many different backgrounds. It is beautiful. This is what America looks like at its best.”

Sanders, who is actually 78, won Michigan against the odds in the 2016 primaries, reviving his candidacy before eventually losing the nomination to former secretary of state Hillary Clinton.

Arab-American voters at the time played a big role in Sanders’ victory. As the state votes for the Democratic nominee on Tuesday, activists are hoping they can be a decisive factor again.

To underline the potential electoral weight of the Arab community, Sayed Hassan al-Qazwini, a local imam, addressed the Dearborn rally in Arabic on Saturday, urging attendees to back Sanders.

“I encourage you to vote for this courageous, noble man, Bernie Sanders, because he represents the values that we all believe in,” Qazwini said.

For his part, Palestinian-American activist and comedian Amer Zahr said Arabs are “proud” to support “our Jewish brother, Bernie Sanders” to become the next president, adding that Sanders’ movement is about love and inclusion.

“The motto of this campaign is ‘Not me, us’. It means fighting for a government and a society that serves the weakest among us,” Zahr said.

“It means standing here in America and fighting for the children of Yemen. And yes, it means having a president who fights for the rights of the Palestinian people.”

While Sanders has been attacked by pro-Israel groups and media pundits for ties to Palestinian rights advocates, including Zahr, the presidential candidate literally embraced the Palestinian-American comedian as he took the stage.

“We’re sick and tired of Trump and his trying to divide us up,” Sanders said.

“Israel” is trying to take action against BDS co-founder

Christmas season at Bethlehem town revered as the place of Jesus’ birth.

Israel’s assault on Gaza in May targeted also animals