Skateboarding has come a long way since its invention in the US in the early 1950s, notably in California and Hawaii where it evolved for surfers to go “surfing” through the streets. It peaked over the following decade before fading in popularity due to safety concerns. The 1970s saw steel and clay wheels give way to polyurethane which helped skateboarding to make a comeback. The first artificially-created skate parks also helped popularise the sport further as new tricks and styles were made possible. In subsequent decades, skateboarding garnered more attention with the rise of professional skateboarders, televised extreme sporting events and the counter-culture scene, which all popularised the sport globally, not least on the internet.

In line with this momentum, skateboarding will be making its debut at this year’s Summer Olympics in Tokyo. For skateboarders, though, it is much more than a sport; it’s a lifestyle that 8offers a sense of belonging among fellow enthusiasts. The Palestinian skateboarding scene is no exception. 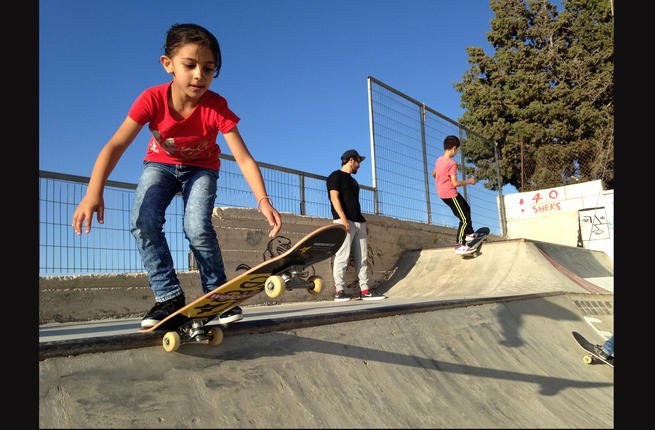 Since 2013, the non-profit organisation SkatePal has been part of this thriving scene and has helped to promote skateboarding’s popularity among Palestinian youth, by providing tuition and equipment, and constructing skate parks in the occupied West Bank. Founder Charlie Davis and co-director Theo Krish spoke to MEMO about the charity’s work in helping more young Palestinians to take up skateboarding.

Davis visited Jenin in 2006 to teach English at a youth centre and, as an avid skater, took his board with him. He told me that he would use it frequently, especially in the evenings after class, much to the fascination of the local children, many of whom were seeing a skateboard for the first time. At the time, he thought that it would be good if someone took more boards to the occupied city, as the children there were definitely interested and there didn’t seem to be any skate shops around.

At our skate lessons in Ramallah, Malek practices her ollies 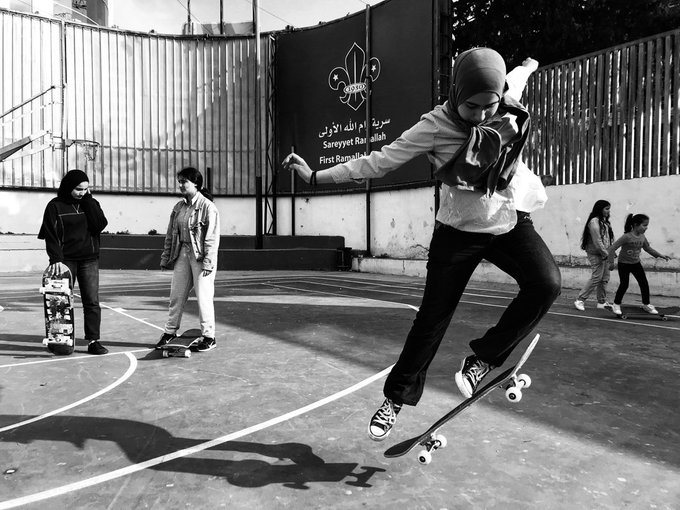 A year later, Davis heard about a new NGO called Skateistan, which was the first international skateboarding charity of its kind; although it was in Afghanistan, it inspired him to think about a similar organisation in Palestine. Having completed a degree in Arabic and visited the occupied West Bank annually since then, he helped to build the first skate park in Ramallah in 2013. It was a simple structure with a wooden ramp, a grind box and some obstacles to be used during a summer camp. This was followed a year later with a concrete structure. At that point, the idea of an NGO still hadn’t crossed his mind.

It was during the 2013 visit that Davis met 16-year-olds Aram Sabbah and Adham Tamimi, who he describes as the pioneers of Palestinian skateboarding, despite only taking up the sport about six months before he arrived. Sabbah is employed by SkatePal as its local manager in Ramallah.

Speaking at their London office, Theo Krish explained that SkatePal has volunteers who come from all over the world to teach skateboarding, and employs local skateboarders as well. “The main aim of SkatePal is to create a sustainable skateboarding scene that doesn’t rely on volunteers and international donations in order to survive,” he explained. This sustainability can be achieved through training local skaters how to upcycle old skateboards, build skate parks for themselves and create a system whereby SkatePal as an international organisation won’t be needed in the future.

Since the first classes in Palestine, Krish pointed out that the charity has had a focus on having as many girls and boys skating as possible. “The real benefit of using a sport — if you want to call it a sport — like skateboarding is that it has no sort of cultural baggage in a place like Palestine. It’s something that’s seen as very new. And it’s something that’s not really seen as being for guys or girls. It’s kind of seen as being there for everyone.”

With a blank canvas, SkatePal was able to present skateboarding as a dual gender activity, more so than it would be in Britain. According to Krish, up to 40 per cent of the young people attending their classes are female, which is a “much higher rate of participation than in Britain or Europe.” Asked why, he said that in the West skateboarding has historically been a white, male pursuit, whereas in Palestine, “it’s kind of whatever you present it to be”. Younger girls are inspired to get involved when they see their older sisters and cousins doing so. “Kids in Palestine are fearless in any case, much more than those in Europe.”

Davis suggested that what SkatePal offers is very different to other forms of charitable initiatives, in that it does not come across as an aid programme. “It’s more like, ‘Can we come skate with you?’” This means, he believes, that you are able to make friends rather than the typical donor-recipient relationship. “We move beyond the ‘us and them’ divide seen in other NGO settings. Whenever I go back, it’s just like going to see my mates.” Skills are then taught organically, as they would back home.

Asked if there are any projects planned for the Gaza Strip, Krish said that in 2018 a group of volunteers unconnected with SkatePal established a permanent skate park there, which has really taken off and is used by skateboarders and rollerbladers alike. Unfortunately, the SkatePal team cannot get access to support them physically, but have been able to donate skateboards from the West Bank to Gaza through people who have a travel permit. It is something that they are hoping to work on in the future.

It would be interesting to see the effects of the cultural aspects of skateboarding which have found their way into the Palestinian scene, as there are quite a lot, apparently. “But everything’s got its own sort of twist on it,” stressed Krish. There are elements of graffiti and the rebellious, teenage nature of skateboarding, but he insists that it is nothing like a mirror image of skateboarding in California or London. “The Palestinian skate scene is very Palestinian, which makes it really exciting to see because it has its own direction.”

How have Palestinian children benefitted from skateboarding? What does it give them? In a very stressful and sometimes hopeless situation, Krish told me, skateboarding offers young people a sense of fun and an opportunity to play. “We want to provide that same sense of fun and freedom that we get rolling down the streets in Britain.” Such opportunities are limited under the Israeli occupation.

Of course, SkatePal regards any child taking up skateboarding as a success story. One of its main volunteers is 16-year-old Malak, who started just over a year ago and has really embraced the sport, which now plays a big part in her life. By encouraging other young girls and women to learn how to skate, it becomes a normal thing for a young girl in hijab to do so on the streets of Ramallah without being stared at. “That has to be positive,” I was told.

Work is already underway on a new skate park in Ramallah, with completion expected in June. SkatePal is collaborating with the Ramallah Municipality to develop a large plot of land opposite a sports centre on the outskirts of the city, which will be the charity’s biggest project to date. After the first four years, Davis hopes that it can be passed into local ownership, which can be self-funded. Related NGOs are also given advice based upon SkatePal’s experience in the field. In London, meanwhile, the NGO offers weekly classes for refugee children.

Krish says that being involved with SkatePal has changed his life in many ways, opening his mind politically to events around the world and developing greater empathy. “Every day when I step on my skateboard I’m more thankful for being able to do it because I can share the experience with young people in Palestine and have friends who are thousands of miles away. The distance doesn’t matter, though; we’re connected through this small piece of wood with wheels.”

How ‘Israel’ tried to put Gaza out of business

The sweet tea and bitter realities of Masafer Yatta

The occupation forces detain dozens of Palestinians after jailbreak