Social media users have called out the Israeli army for a Twitter post celebrating two female soldiers for cutting off their hair for a good cause.

The Israeli army said the pair donated their hair to make wigs for cancer patients, and described it as “a beautiful act of kindness”.

A picture of the two soldiers, identified as Noam and Inbal, shows them smiling and holding their freshly cut hair.

But critics pointed out the irony of the post, reminding the Israeli army that they regularly deny thousands of cancer patients from the Gaza Strip permission to travel for treatment.

“Nothing says kindness like forcing cancer patients to die in an open air prison in Gaza,” Remi Kenazi, a Palestinian-American poet based in New York, responded on Twitter. 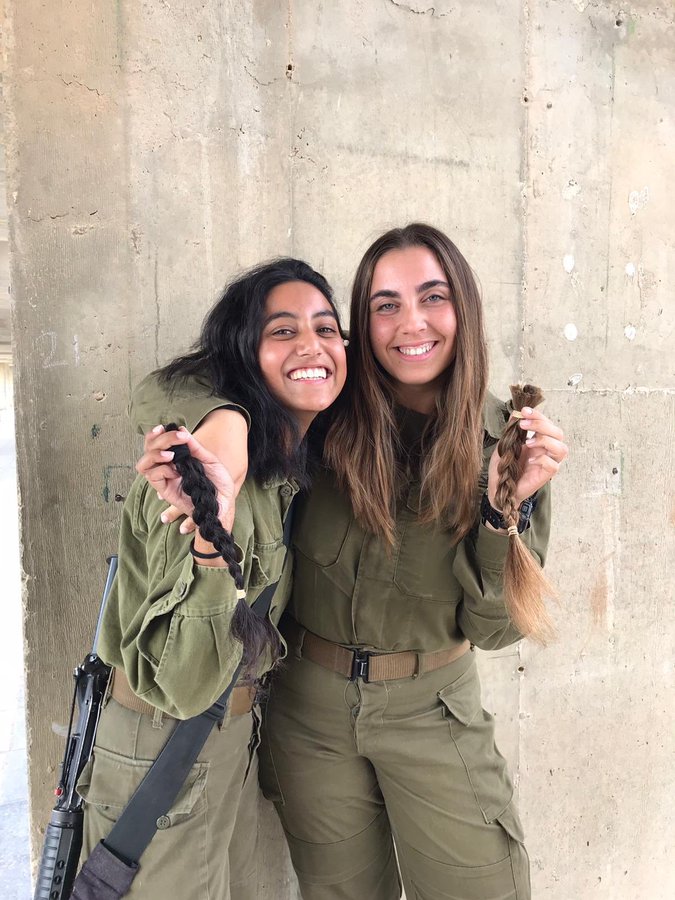 If you guys can also stop killing Palestinians that be super

142 people are talking about this

The Gaza Strip has been under a joint Israeli-Egyptian blockade for more than a decade, where freedom of movement for the population of two million has been severely curtailed.

Palestinians from Gaza can exit the coastal blockade through the southern Rafah border, controlled by Egypt, or from the Israeli-controlled Beit Hanoun checkpoint in the north, also referred to as Erez.

But Palestinians can only exit the Erez checkpoint after they have received a special permit issued by the Israeli military, which is notoriously hard to obtain.

Israel regularly refuses permits to cancer patients trying to leave Gaza for treatment, something they are forced to do because the Israeli and Egyptian enforced siege prevents them from getting treatment at home https://twitter.com/IDF/status/1192804171713515531 …

348 people are talking about this

Sarah Leah Whitson, the Human Rights Watch director for the Middle East and North Africa region, called on the soldiers named in the Israeli army’s Twitter post to ask their superiors to allow cancer patients in Gaza to medical treatment.

“They and so many other Palestinians urgently need medical care but are blocked by Israel,” Whitson said.

Hi Noam and Inbal – great that you want to help! can you please ask your bosses at the @IDF to open the #Gaza border so that cancer patients there can get urgently needed medical treatment? They and so many other Palestinians urgently need medical care but are blocked by #Israel https://twitter.com/idf/status/1192804171713515531 …

2,272 people are talking about this

Others described the Israeli army’s post as “sickening” and “revolting”.

Revolting IDF boast about their female stormtroopers ‘kindly’ donating their hair for wigs for Gaza children with cancer, while Sick Gazans die because they are not permitted to access medical treatment. Genocide and hubris in the racial colony https://twitter.com/IDF/status/1192804171713515531 …

“Can you imagine that in 2017 only, 57 cancer patients died in #Gaza because they couldn’t get permission for treatment,” he said. “This is hypocrisy!”

According to the World Health Organization (WHO), 39 percent of patient applications for permits to exit Gaza for healthcare in 2018 were unsuccessful.

“The ability of Gaza’s hospitals to provide adequate diagnosis and treatment to cancer patients is severely limited due to chronic shortages of medicines and lack of medical equipment,” WHO said in a report last February.

The Palestinian Ministry of Health said in February that the number of cancer patients in the Gaza Strip had risen to 8,515 – including 608 children.

Most cases are diagnosed at a late stage, leading to difficulties in symptom control and treatment options.